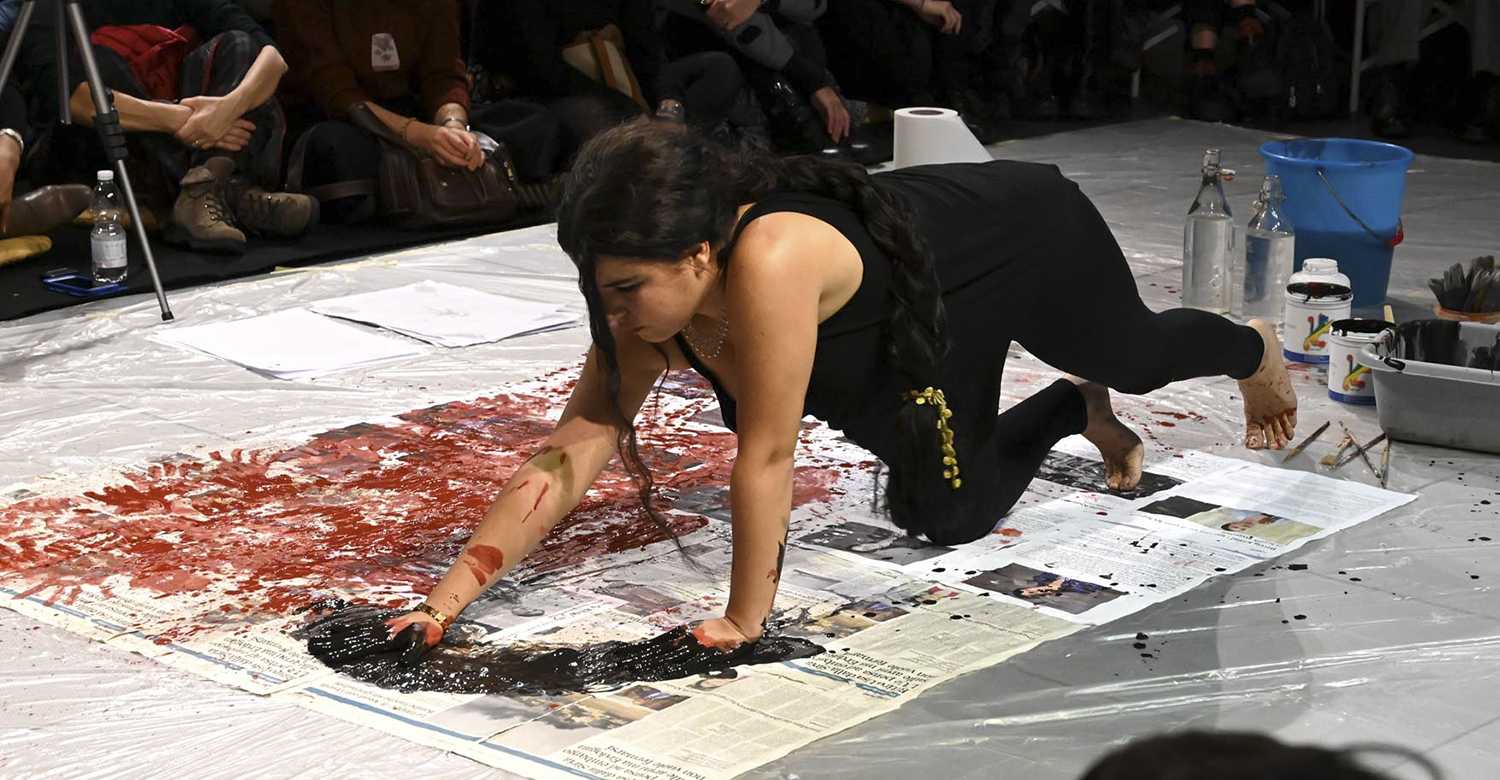 On 25 November 2020, on the occasion of the International Day for the Elimination of Violence against Women, the Padiglione d’Arte Contemporanea (PAC) once again speaks out against all forms of violence and discrimination and inaugurates a new collaboration with the Kurdish artist Zehra Doğan.

Throughout the International Day, the PAC website will broadcast the video documentation of the artist’s performance In memoria di Hevrin Khalaf [In memory of Hevrin Khalaf], which was performed on 23 November 2019 as part of her first solo exhibition –  promoted by the Fondazione Brescia Musei – at Brescia’s Museo di Santa Giulia in November 2019.

During the action, performed before more than 200 people, Zehra Doğan paints a portrait of Hevrin Khalaf, the Secretary-General of the Future Syria Party, an activist for women’s rights and a frontline proponent for the recognition of the Kurdish people’s identity, who was killed on 12 October 2019 by Arab mercenary militias backing the Turkish offensive. The newspaper pages that Doğan paints on are from the days when the news of the assassination was widely reported by the media.

This online initiative is the first element of a three-act project entitled IL TEMPO DELLE FARFALLE. Dedicato a Patria, Minerva, Teresa Mirabal [THE TIME OF THE BUTTERFLIES. Dedicated to Patria, Minerva and Teresa Mirabal], curated by Elettra Stamboulis and produced in collaboration with the Fondazione Brescia Musei. It will be completed by Doğan’s Project Room at PAC from 18 December to 14 February, and by her new performance, designed specifically for PAC, which will take place in February.

Zehra Doğan (Diyarbakır, 1989) is a journalist, a co-founder of the first entirely female press agency, a visual artist and activist. She has introduced a new focus on the art that comes into being in the confinement of captivity, assisted by an artistic process that combines listening to others, feminist practices, sharing, and the use of impromptu materials and the immediacy of sight. On 23 February 2017, as a result of her work as a frontline reporter, and in particular for a drawing and various articles she had written during the conflict in Nusaybin, she was sentenced to 2 years and 9 months in prison and held in the Amed women’s prison until she was forcibly transferred to the maximum-security prison in Tarsus. While in jail, Doğan created works using makeshift means, drawing and painting with discarded materials and on any supports she could find. She managed to smuggle her works out of the prison in a rocambolesque manner: she wore them under her clothing and entrusted them to her visiting mother, who then handed them to a chain of activists in contact with France. On her release on 24 February 2019, Doğan was awarded numerous awards and one of her installations was even exhibited at the Tate. Since March 2019 she has resided in London, where she lives as an exile.

The title of the PAC project, THE TIME OF THE BUTTERFLIES. Dedicated to Patria, Minerva and Teresa Mirabal is a tribute to Aida Patria Mercedes, Maria Argentina Minerva and Antonia Maria Teresa Mirabal, the three sisters who, under the nom de guerre Las Mariposas (The Butterflies), opposed the dictatorship (1930-1961) of the Dominican Rafael Leónidas Trujillo, in retaliation for which they were assassinated.