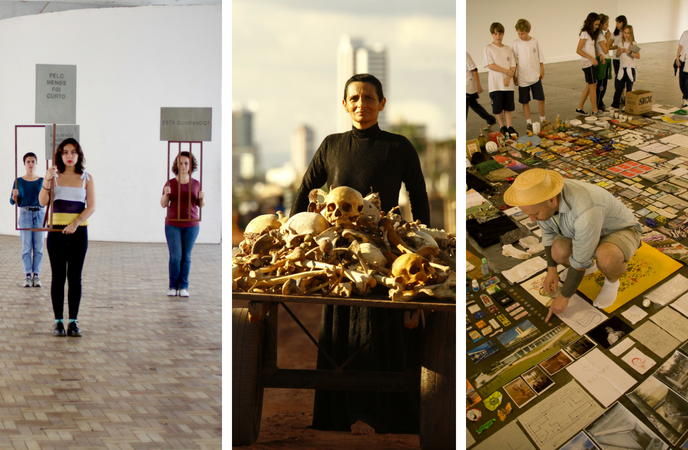 On the occasion of the Brazil exhibition. The knife in the flesh the artists Ana Mazzei and Regina Parra present the Ofelia performance to the PAC.
The artists re-read Ophelia's character, selecting the passages of the Shakespearean drama that from their point of view reveal the submission and dependence of the young woman from the male figure. Ambiguous phrases, which evoke resistance and protest but also alienation and submission, and which appear in the text as traces of the inexorable destiny awaiting Ofelia. The artists paint his words on wooden panels supported by minimal and geometric iron structures, supported as signs of protest by women who, moving in the exhibition space, evoke a procession or a demonstration and create a body-to-body relationship with the visitor.

On the occasion of the Brazil exhibition. The knife in the flesh the artist Bern Royal presents for the first time ever the performance Camouflage, which will start from the CAP and then develop along some streets of the city.

The artist - dressed in a military camouflage uniform made by her - will push a wagon full of sheets used to cover the victims of violent deaths in Brazil, whose bodies are left on the street awaiting the arrival of the police.

An awareness but also an act of denunciation against the increasing forms of violence in our cities.


1 exhibition space as a home, 15 days of performance, 1 artist and the audience as protagonists.
On the occasion of the Brazil exhibition. The knife in the flesh the artist Maurício Ianês presents the performance Untitled (Dispossession).

The artist, who realized for the first time this action during the San Paolo Biennial in 2008, will appropriate this time of the CAP and will live there for two weeks relying exclusively on the help of visitors to survive: it will nourish only if the public will bring him food, linen and clothes.
The performance is part of a series of three live moments (3 and 4 July and from 5 to 19 July) featuring artists from different generations, who tackle themes related to the historical and social change of Brazil using the body as a territory of identity research .

Entry upon purchase of the exhibition ticket

Visitors are invited to bring clothing, food or gifts for the sustenance of the artist