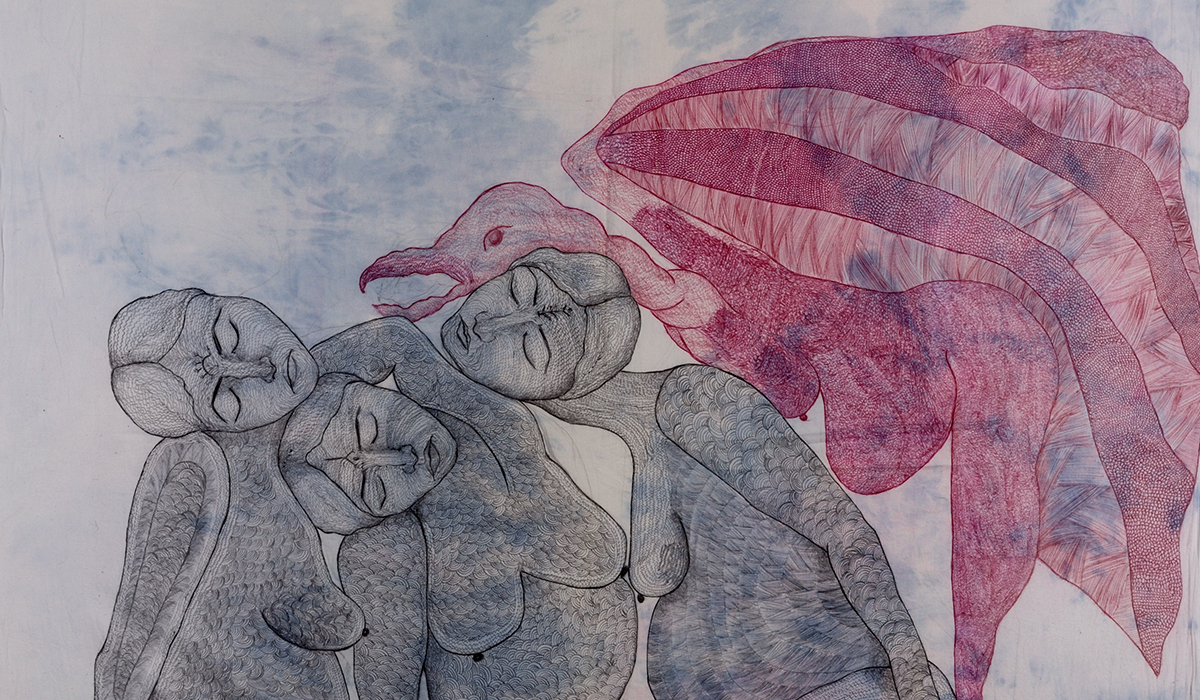 The new PAC Project Room series opens with a focus on Kurdish artist Zehra Doğan, a journalist, visual artist and activist who has brought new attention to art born in prison and based on listening to the other, feminist practice, sharing, use of extemporaneous material and instantaneousness of the gaze.

THE TIME OF BUTTERFLIES. Dedicated to Patria, Minerva, Teresa Mirabal, curated by Elettra Stamboulis and realized in co-production with Fondazione Brescia Musei, it began on November 25 with the publication on the PAC website of a performance by the artist on the occasion of the International Day for the Elimination of Violence against Women and is completed with the exhibition of a selection of works created by the artist in prison and a new performance, conceived for the PAC.

The title of the project at PAC,THE TIME OF BUTTERFLIES. Dedicated to Patria, Minerva, Teresa Mirabal is a tribute to Aida Patria Mercedes, Maria Argentina Minerva, Antonia Maria Teresa Mirabal, the three sisters who fought the dictatorship (1930-1961) of the Dominican Rafael Leónidas Trujillo under the battle name Las Mariposas (The Butterflies) and for which they lost their lives.

Zehra Doğan (Diyarbakır, 1989) is a Kurdish artist and journalist with a degree in Art and Design from Dicle University. On February 23, 2017, following the publication of a drawing on Twitter during the Turkish army's attack on Nusaybin, she was sentenced to 2 years and 9 months in prison. Detained first in the women's prison of Diyarbakir, then in the maximum security prison of Tarsus, she manages to create, together with other inmates, a journalistic editorial office inside the prison and to create works using the objects she has at her disposal. Her works reach abroad in a haphazard way, through the network of activists and the help of her family. Released on February 24, 2019, she moves to London where she exhibits an installation at the Tate. In November, Fondazione Brescia Musei opens her first solo exhibition, Avremo anche giorni migliori. In 2015 she wins the Metin Göktepe Journalism Awards for her reportage on Yazidi women. Since her release from prison, she has received numerous awards, including the Carol Rama Prize and the Hypatia Prize for Female Excellence (2020), the Index on Censorship Freedom of Expression (2019), the Exceptional Courage in Journalism Award (2019), the Spring of Press Freedom (2018) and the Freethinker Prize (2017). 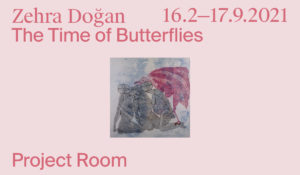 The Padiglione d’Arte Contemporanea’s new PAC Project Room series opens by putting the Kurdish artist Zehra Doğan under the spotlight. The project, which is curated by Elettra Stamboulis and co-produced with the Fondazione Brescia Musei, is split into three parts. It began on 25 November 2020, on the occasion of the International Day for the Elimination of Violence against Women, with the video of Doğan’s performance dedicated to Hevrin Khalaf – the feminist activist and secretary-general of the Syrian Future Party, who was killed on 12 October 2019 – which was broadcast on the PAC website. The project is rounded off with a display of a selection of works that the artist produced in prison and a new performance, conceived specifically for the PAC.

Zehra Doğan is only 30 years old, but she has already experienced several lives as a journalist, co-founder of the first entirely female press agency, visual artist and activist. She has focused new attention on art that is created behind bars, thanks in part to her artistic process that combines listening to others, feminist practices, sharing, the use of impromptu materials and the immediacy of the act of looking.

Since expensive pigments were obviously not available in the Turkish women’s prisons, Doğan created her paintings with whatever was at hand: scraps of leftover food, menstrual blood (even that of others) and coffee grounds were just some of the materials she used. And even the supports on which they were painted were unusual: prison bath towels, the tinfoil from cigarette packets or her scarce authorized letters were reused – everything became a support with which to resist, through art.

One of the main, recurring elements in her compositions is the metamorphic and perturbing female body, characterized by wide-open eyes that implore the viewers to really look, to open our gaze past simplifications and beyond the continual forgetfulness that afflicts us. This theme of wide-open eyes, which no doubt is also based on the iconography of traditional art, acquires a new value in Doğan’s processes and practice because although on the one hand there are recurring elements that derive from a cultural sub-layer that speaks a language spurned by the Turkish government, on the other hand Doğan’s creative methods emerge from reflection that draws its power from the contemporary. 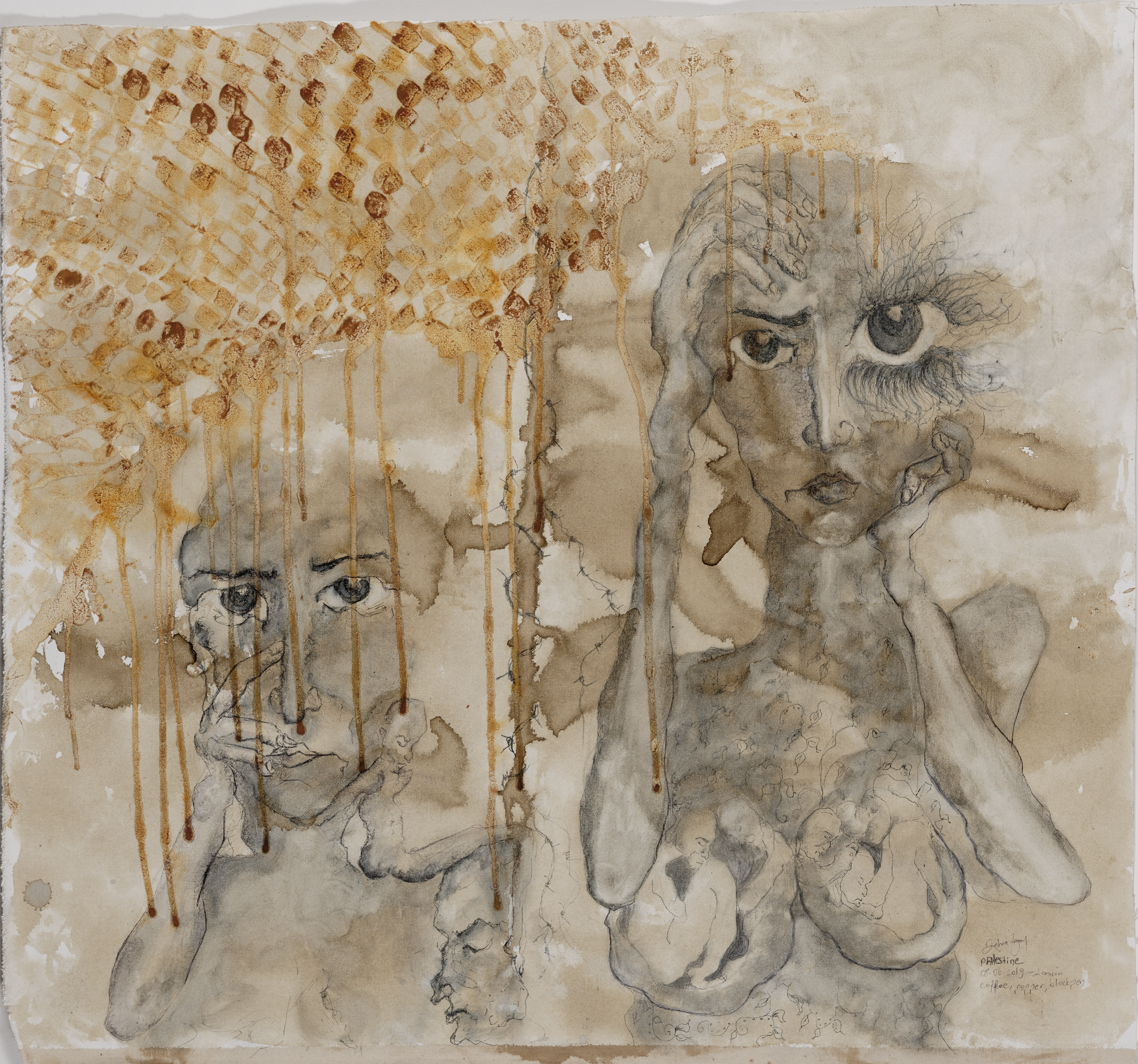 Doğan also resembles a shaman who can interpret dreams: the dream material occupies as much place in her work as the political material. Besides the works dedicated to the destruction of Afrin and the resulting exodus of its inhabitants who, by stepping beyond the city limits, become refugees, she also produces works that translate the dreams of her fellow female prisoners into images.

As an exile in Europe, Doğan’s imagination is a jam-packed trunk in which the experience of pain has clearly provided her with just one weapon – the paintbrush – but at the same time has also given her an irresistible determination to achieve happiness. “For me, life itself is art”, she replies, when asked to give an insight into her work. 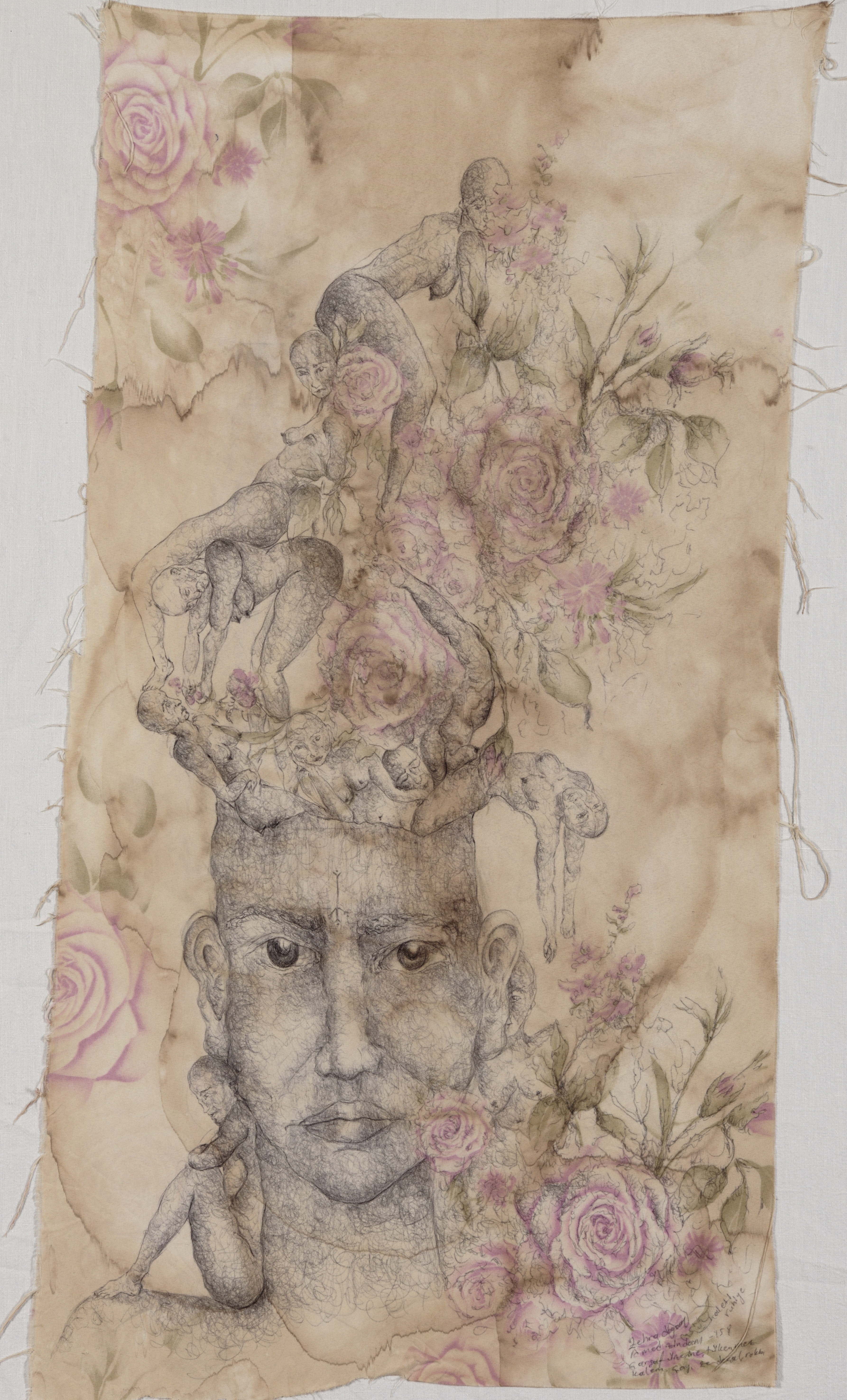 In the Project Room, a selection of twenty works created in the prisons will be exhibited: the Day of Blood series, produced in Diyarbakir prison, is made with menstrual blood and establishes a link between the symbolism of blood as the war of men and as the monthly female experience that is still full of taboos. The works Untitled and Dynamic self-portrait, both of which are painted on pages of the Demokrasi newspaper, deal with the working methods of art and the press. They are shown alongside A dream, which is part of the series dealing with the activity of dreaming: when you have nothing to draw or to depict because your world is closed off behind four walls, dreams become an important source of inspiration.

Mugdat Ay, painted on a towel, immortalizes the memory of a boy killed in Nusaybin when he was only 12 years old: Zehra was present, and the marbles that remained clutched in his hand as they took his lifeless body to the hospital are not mere rhetorical exaggeration, but the unfading recollection of a witness. The 2017 works, Fatima’s hand and Untitled, also produced in Diyarbakir, reveal her awareness of the use of craft techniques, such as embroidery, to convey a political and gender-related element.

Bird-women and Woman of henna were produced in the Tarsus prison, a category C prison according to the Ankara regime’s scrupulous categorization. The exhibition ends with Palestine, which she produced in London, shortly after her release, for a project with an Iranian musician, and Shirt, a souvenir-object that bears the messages and writings inscribed by the other female prisoners when Doğan was released from prison. This piece is a tangible mark of the importance that the artist places on her relationships with others, even those who are no longer here – as is the case for the Mirabal sisters, to whom this project is dedicated in spirit. 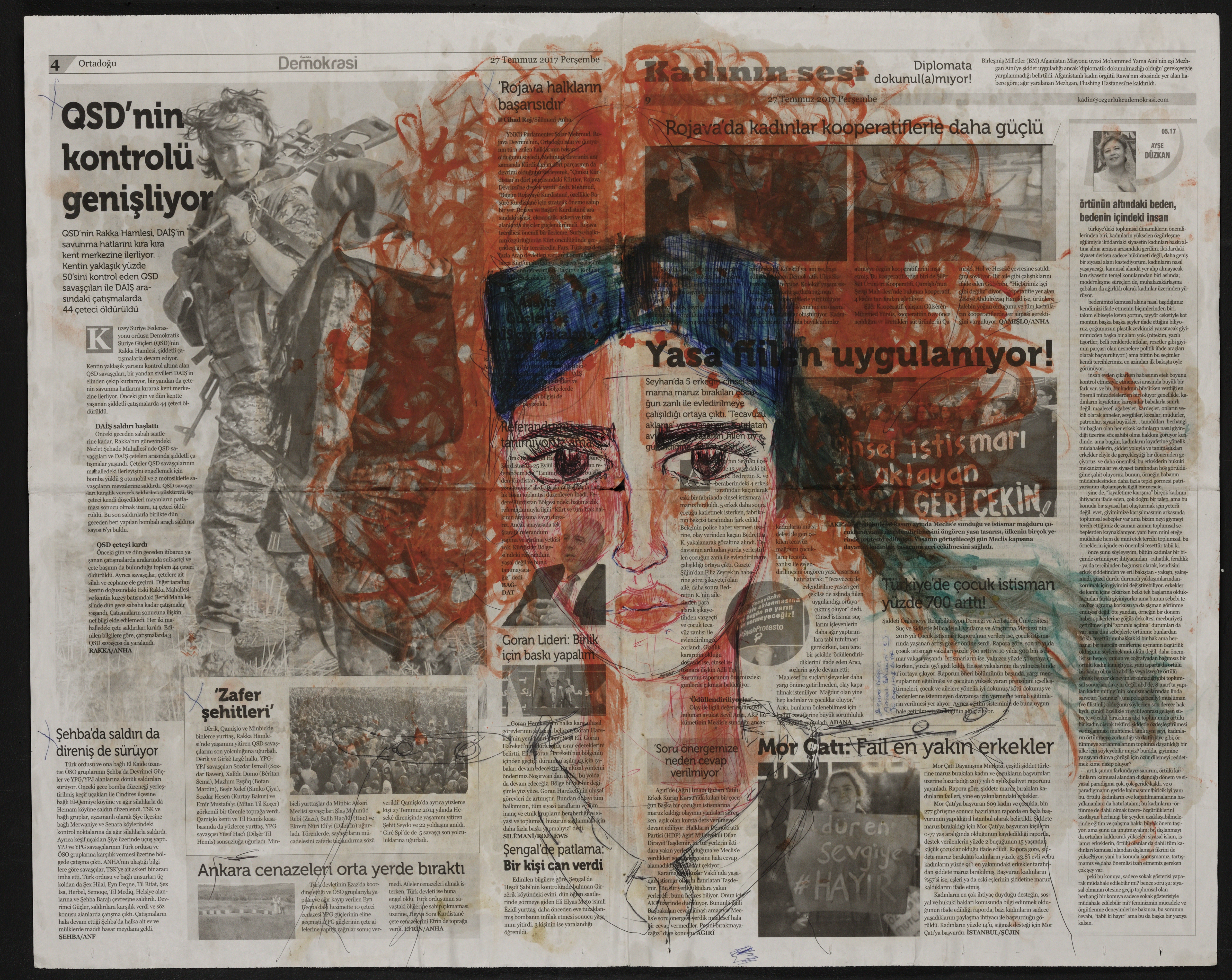 Zehra Doğan (Diyarbakır, 1989) is a Kurdish artist and journalist who obtained her degree in Art and Design from Dicle University. On 23 February 2017, she was sentenced to 2 years and 9 months in prison for publishing a drawing on Twitter during the Turkish army’s assault on Nusaybin. She was detained first in the women’s prison in Diyarbakir, and later in the maximum-security prison in Tarsus. She managed to set up a newspaper inside the prison assisted by other inmates and to create artworks using any available objects. Unsuccessful appeals for Doğan’s release from unjust imprisonment for expression of opinion were made by the Chinese artist Ai Weiwei, by PEN International and by Amnesty International. Banksy also dedicated an immense mural to her; the Bowery Wall in New York. Through feats of derring-do worthy of a thriller, with a network of activists and the help of her family, she was able to smuggle her works to the outside. On her release on 24 February 2019, she moved to London, where she mounted an installation at the Tate. In November of that year, her first solo show, Avremo anche giorni migliori (We will also have better days), was held by the Fondazione Brescia Musei. In 2015, Doğan won the Metin Göktepe Journalism Awards for her reporting on Yazidi women. After her release from prison she received numerous awards, including the Carol Rama Award and the Hypatia Award for International Feminine Excellence (2020), the Index on Censorship Freedom of Expression Award (2019), the Exceptional Courage in Journalism Award (2019), the Spring of Press Freedom Award (2018) and the Freethinker Prize (2017). In September 2020, she produced a series of works for the Prometeo Gallery in Milan and participated in the Berlin Biennale and in international round tables such as the Peace Forum in Basel. Artreview included her among the 100 most influential contemporary artists. She lives as an exile in Europe, and after a period in London is now based in Berlin, where she is working on a project for the Gogol Theatre.